It is self-explanatory that workers doing night shifts become decoupled from their natural rhythm. The biological clocks of workers who do multiple successive night shifts are able to adjust to some extent to the changed day/night rhythm. Nevertheless, these workers normally suffer from sleep deprivation. This in turn results in workers with poorer concentration and performance levels.

Consequently, these workers are less alert and have trouble sleeping in the day. And to think these workers simply get into their cars on finishing their night shift. You may well wonder if the employer should be concerned about the extra risks that his night workers are taking while driving. Or should the employer consider his employees’ commutes as their own affair.

Is the employee working a whole series of night shifts or is he just working a single night, as is still the case in the nursing and caring sector? This will lead to serious sleeping problems. While some people are able to take an hour-long nap in the evening before their night shift, the majority are unable to do so. The result is that by the end of the first night shift, these workers will not have had any sleep for around 24 hours. And remember that many night workers drive home after work.

On 6 December 2016, the AAA Foundation in Washington, US published a study in which the analysed more than 4,500 traffic accidents that took place in the US around ten years ago. The accidents took place between 06.00 and 24.00 and involved at least one car, van or similar vehicle. All these accidents required emergency medical services. Alongside its law enforcement tasks, the US Mystery of Transport conducted a special study. The study eventually involved a random sample of 7,234 drivers in 4,571 traffic accidents. The researchers examined the quantity of sleep had by drivers whose actions or mistakes contributed to the accidents and compared it to that of drivers involved in accidents through no fault of their own. 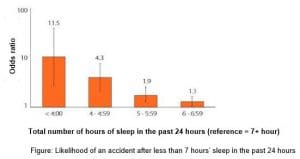 A significantly increased risk of accident was found among drivers who had slept less than seven hours in the preceding 24-hour period, according to the AAA Foundation report. An increased risk of accident already occurs if a driver has had one or more hours less sleep than normal. The estimated chance of an accident when driving after just 4-5 sleep was comparable to driving with a blood alcohol level of slightly more than 0.08%.

Other studies suggest that the sleepy drivers are most likely to be on the road at night time and in the early morning. The negative effects of sleep deprivation are highest during the early morning. This suggests that the actual risk of sleep deprivation late at night and in the early morning may be even more serious than estimated in the study. Symptoms of driving when tired are having difficulty keeping your eyes open, not staying in your lane, or dreaming and being unable to remember the last couple of kilometres you have just driven. Unexpectedly, however, more than half of the drivers who were involved in a fatigue-related accident showed no symptoms before they fell asleep behind the wheel.

In truth, there is only one solution to avoid an increased risk of an accident following a night shift: don’t drive. However, night workers will not always see the benefit of this.

What can the employee do?

What can the employer do?

This article was published in the trade journal Arbo no 4 2017, Vakmedianet – by Leo Bonefaas

More on this topic

Seven qualities of a good planner

In many organisations, the planner plays a pivotal role which is often underrated. This is because planning involves more than simply ‘drawing up a schedule’. In practice, many employees unexpectedly find themselves working as planners.

Many Dutch people regularly work nights. A healthy and varied diet it is important for everyone, but even more so for this particular group. Here are 10 tips to get through your night shift hale and hearty!